Tyler’s crew started the break-in process with a warm-up on the road in front of their rural home. Followed by an oil change, loading the trailer, and an hour-and-a-half drive to International Dyno Authority in Ottawa. 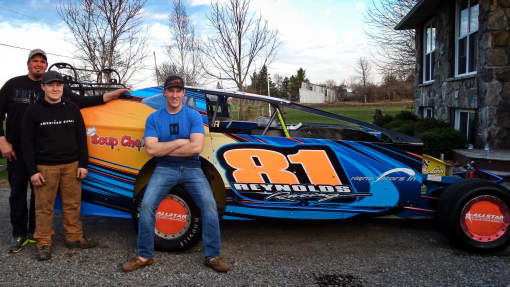 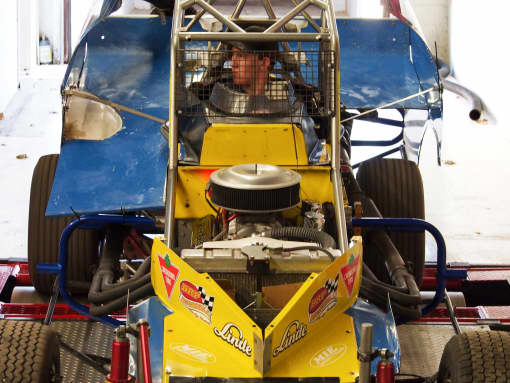 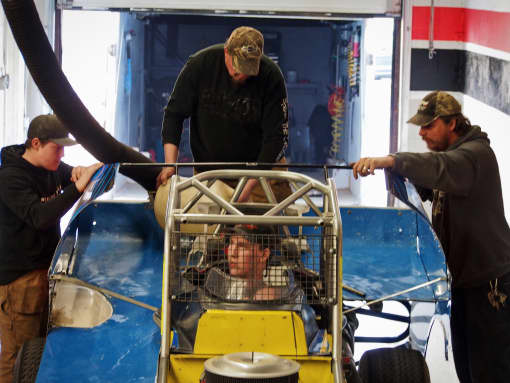 When Tyler and his crew (Jason Reynolds, Evan Reynolds, Paul Pekkonen, and Carl Jobson) arrived at International Dyno Authority, they got straight to work strapping down the stock car and performing a thorough visual inspection. Then it was time to begin warming up the 602. The 602 is a cold running motor, so we let it run on the dyno for a while until it reached an operating temp. of 160+ degrees Fahrenheit.

Next, we did an initial shakedown to ensure all systems were operating correctly and to get a baseline. We did three passes beginning at 2,000 RPM and finished at 4,000 RPM.

Next, we shut down for a thorough inspection of all components to ensure there were no fluid leaks, loose bolts or other issues.

Now it was time to start the break-in passes.

Unfortunately, after the first few passes, the pickup magnet on the dyno lost its magnetism and stopped transmitting data. One hour, and four large pizzas later, the dyno and the team were ready to start again. 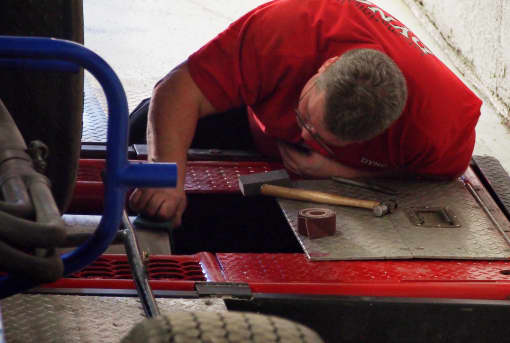 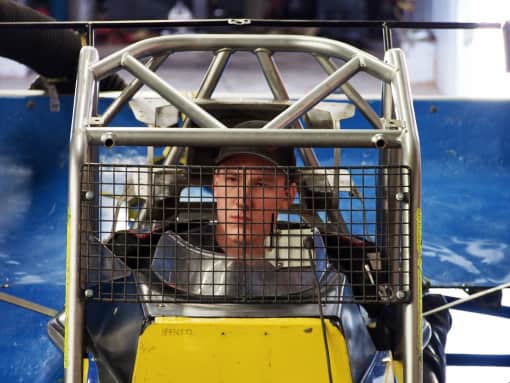 We started with ten passes, running from 3,500 up to 5,000 RPM. As the break-in progressed, by the eighth pass the 602 was delivering an 83 ft-lb. increase in torque, and an additional 113 horses at the wheels.

By the tenth pass, with the rings set into the cylinder hones, the torque increase was 95 ft-lbs., over baseline, with a power gain of 128 HP.

Now with the engine at racing temperature, the next ten passes consistently produced 89 ft-lbs, and 113 HP over the baseline results, with the drop in power attributable to the higher operating temperature.

Since the engine had demonstrated some fluttering on the previous passes, the pit crew dropped the jetting – reducing the back jets from 77 to 67 and the front jets from 74 to 62.

With the carb leaned out, Tyler made another ten passes, and the 602 stopped fluttering but delivered the same results – pass-after-pass – of 98 ft-lbs. and 113 HP over baseline. Likewise, setting up an air breather with a vented lid did not affect any change in the data. 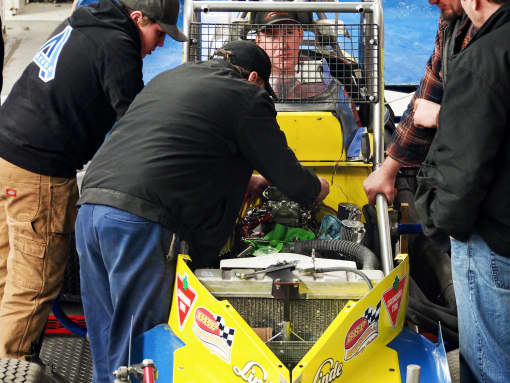 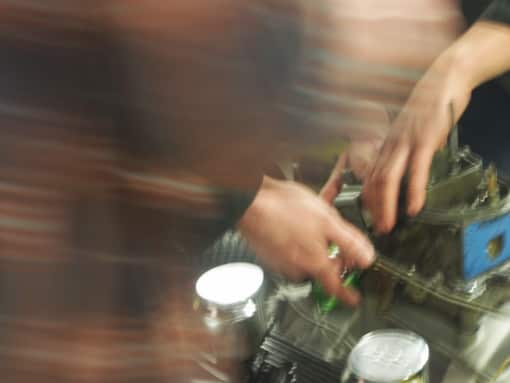 Though Tyler will never run a 2-barrel on this car, he wanted a rough idea of what the engine could put-out in the Vintage Class. So, the crew switched-out the Holly 650, 4-barrel for a 2-barrel version.

With the reduced airflow of the 2-barrel, the engine produced 40 fewer ft-lbs and HP dropped by 38; however, the engine became much more responsive. The lower-end RPM range demonstrated a cleaner ability to pick-up RPM and the carbs overall performance was jetted closer and with better fuel settings.

With the break-in and testing completed, Marc and the crew spent some time reviewing the results. Overall, everyone agreed that, once properly broken-in on the dyno, the 602 delivered as promised by the manufacturer. The dyno results showed very little power loss between the gears and the wheels, so the 602 may have actually exceeded the manufacturer’s guaranteed specs.

Five-hours after arriving, the crew packed-up and prepared for the long drive home with properly seated rings and an accurate picture of the power range this car could deliver. 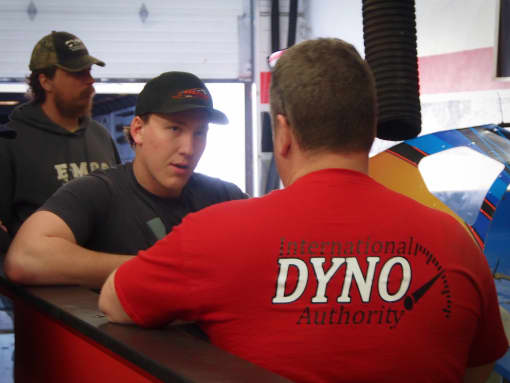 Nineteen-year-old Tyler Reynolds inherited his love for speed from his father, Jason Reynolds, who raced street stock in the 90’s. Jason stopped racing after his kids were born so he could focus on raising his family, but he never lost his enthusiasm for the sport and has passed it on to his boys. Tyler says his love for the sport comes from the thrill of experiencing the raw power of the engine on the track.

When Tyler was 11 years old, his father set him up in a flathead Briggs & Stratton go-cart, burning methanol fuel and kitted-out with an aluminium flywheel and rods, the cart made about 12 HP on the oval dirt track.

Tyler was immediately hooked on racing. With dad, mom, and younger brother Evan acting as pit crew, Tyler spent the next four seasons on dirt oval tracks at the Brockville Speedway, Cornwall Speedway, and in the US at tracks like Can-Am, Route 58, and the Paradise.

By Tyler’s third go-cart season, then 9-year-old Evan, was also racing. That year, both brothers finished the season second overall in their respective divisions.

In 2014, when Tyler was 15-years-old, he moved up to Stock Car racing, running a Chevy 350 cu. in., 602 sealed crate motor on a Bicknell frame with a Winters rear-end and a Falcon 2-speed transmission.

Tyler’s pit crew has expanded to include long-time family friend and Sprint Car racer, Paul Pekkonen. Tyler was also supported by Jeff Ciglich – a former Modified Stock Car racer, who helped with setups and scaling, and from Derrick Flynn who, together with Jeff, run the Dirt Modified Nostalgia Tour.

In 2017, Tyler switched over to the Vintage Modified division, running a coupe modded from a 35-coach body. That year he finished 2nd overall in his division.

But, for the coming 2018 season, Tyler has decided to switch back to his real passion – Stock Car racing. He’s hoping the skills he developed driving the more difficult to hold, open-bodied vintage coupe will translate into a successful 2018 season. 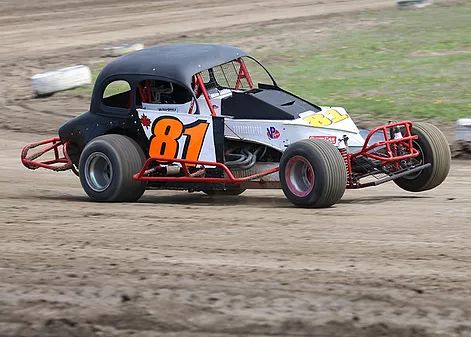 Dan Makela
19:36 16 Jun 17
The only place around where you can get this kind of service. Marc is a truly knowledgeable and passionate guy. Highly recommended

Aaron Jacques
01:32 03 Aug 18
Top notch crew and shop! They know their stuff and know how to get every last bit of power and torque out of engines. Awesome all around experience...highly recommend and they will be my "go-to" shop from now on.

Robert West
18:42 03 Apr 19
I got my Chevy 355 dyno tuned here. Marc is very knowledable and patient, if you're looking for a place to get a dyno done in the Ottawa area stop looking. You've found the best one.

JV HEMI
22:01 03 Apr 19
I was there last year too Dyno my car and i will be making plans to return this yearGreat Place Great People

Tim Luesby
17:27 25 May 19
Great guys who know what they are doing. Got an extra 86 hp with some adjusting and the car has never run better.

Joe Chevelle
04:01 07 Aug 19
Great place to get tuning done they help me alot and greater people

Jeremy Backs
13:22 02 Sep 19
Brought my Merkur to get tuned after being parked for 4 years, during that time it got a built motor, transmission and turbo upgrade, Marc, Wally and Chris all did a spectacular job, even when scratching there heads for a couple issues, they kept on having a positive attitude and even tried to teach me a few things and show how the process is done, these guys are definitly beyond the definition of professional and will take care of your car and you, I completely recommend bringing your car, bike, anything with a motor and these guys will figure it out and will help make safe reliable power. Even gave the Merkur a plug in his Facebook Livestream!! If you want to see what these guys do check them out of facebook or give them a call, these guys have your back.

Ryan A
03:25 19 Apr 20
Extremely satisfied with International Dyno Authority.Marc and Wally are exceptionally knowledgeable and take the time to explain the processes and progression. Highly recommend!

CSELL
04:40 11 May 20
Fantastic Service from Marc and Wally. They are super friendly and extremely knowledgeable. Highly recommend them to anyone looking to have their car tuned and or get a baseline. Best Engine and Chassis Dyno around!!

Glen Lastiwka
04:52 31 May 20
House of power! Wally and Marc are one the best tuners around . Very professional and easy to work with.

Phil Tavares
18:15 06 Jun 20
The best dyno shop in Ottawa ! They treat you like family. Very professional and knowledgeable. I had my 5th Gen Camaro SS tuned by Marc and Wally and left smiling from ear to ear. The car runs super great and I have absolutely no complaints. Marc explained everything clearly and Wally did his magic, they got the beast out of it ! 75HP increase and over 100TQ at the wheels. It feels and drives like a new car on steroids. I would highly recommend this place for your tuning needs.Thanks guys ?

Bart Bristow
15:49 22 Jun 20
Great place to have your car tuned. Very experienced and knowledgeable folks that also make it fun!

Sylvain Deshaies
02:23 14 Jul 20
This is an awesome friendly professional team, who worked at tuning this Gen 3, Coyote engine with 10R80 transmission, quite an amazing result, did not expect that much but you guys did it, thank you to Wally Walter Alberto and Marc Chartrand. Highly recommends this shop for tuning needs, this is the place, you will get results. Bravo zulu to all. The Orange Team lolll Anne & Sylvain

Russ Salo
12:20 30 Jul 20
Marc and Wally are great at what they do! It's a real pleasure to work with them. There's no pretense or posturing here just good honest HOT ROD experience. Marc answers the emails you send..good communication no flakiness like so called other tuners or experts...They were able to pull about 60 extra HP out of my 440 Charger. As well they had me back for a small adjustment I wanted done and Wally diagnosed the problem in about 3 minutes and tweaked the program on my MSD EFI and POW!!! Throttle response I was hoping for...wonderful....

Tristan Beavan
03:47 25 Aug 20
Came in to get my axle and tire size recalibrated. Easy fix, but why stop there?.. you are at a Dyno shop! Woke my truck up from a 20 year nap. Less fuel, more power, and you wouldnt know my short box chev is a V6. The guys are great to deal with, very knowledgable, and talk honestly.The guy that left before me said "You will love this". 60s guy in a 60s muscle car with a smile bigger than a kid with candy. He wasn't wrong.

Sandro Savone
18:00 01 Sep 20
The absolute go to place to get your car tuned!Thanks to Marc and Wally! It was a Great Experience!

Ameen
13:18 10 May 21
BEST CUSTOMER SERVICE EVER. I actually only had basic knowledge about dyno tuning and i called these guys to book a tone for a car i was going to buy from ottawa and he filled me with all the details i needed and more i needed to know about the car and tune, now i have a good idea what to ask b4 i even buy the car, i wouldnt even mind diriving all the way from toronnto to this place to do any work with my cars. NO WORDS BUT RESPECT.

Pierre Ladouceur
13:31 06 Mar 21
Marc and Wally are awesome guys and are very knowledgeable! They were able to answer all my questions and educate!I went in with my 2017 Silverado 5.3l and they were able to get an extra 190ftlbs/lb of torque and 135whp out of it, with there custom tuning. Incredible work these guys performed!

The Last
00:48 16 Jun 21
Hands down. Marc And Wally have got it going on. they literally pulled a rabbit out of a hat with my truck. Yes! it is expensive! Yes it is worth it! Yes I would do it again! if you compare dollar for dollar what you get with other " tuners" this is an absolute no brainer. Proud to say I was able to join the 400HP club with their help! Book your appointment with these guys, and unleash the true potential of your vehicles engine. Way To Go International Dyno Authority!

David Nunya
00:10 25 Feb 22
Can't express how much I appreciate these group of great guys! Took the time to show/explain what they were doing with my ride and glad I chose Dyno Authority to tweak my toy. My ride runs better than ever! Doesn't matter what you drive, these guys will make it more efficient and add power!
See All Reviews Write a review